Mozilla Fennec 1.0 Beta 1 for Linux, Mozilla has released the beta for Fennec, the browser version for Linux ...

Seesmic Desktop 0.2 for Linux, you are a citizen of the social network FaceBook or was "addicted" tweets even if you use both networks, the update of a friend always be necessary ...

JDownloader for Linux, jDownloader is an open source application works on Java platform. With this program, the download from the online storage sites like Rapidshare or Megaupload becomes quite easy, even if you do not have a premium account ...

Strata Kirix for Linux, there are very few tools that we should be surprised, and Strata of Kirix is ​​one of them. This is the first browser and the best, use it also brings interesting feeling when you open a Web page that contains tables full of numbers. 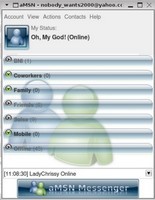 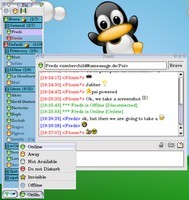 Psi for Linux, PSI is a free chat software for those who are using the Linux operating system.

KMess for Linux, is an option Kmess MSN on Linux. Clear simple interface easy to use.

Oweb Friend's Current Time for Linux, you have many friends, who come from different countries with different time zones? You want to call or chat with them now, and you want to know at this time what time the party?

Cooliris for Linux, Cooliris is a browser plug-in, as

Send to Mobile for Linux

Flixster Movies for Linux, Flixster is a

InvisibleHand for Linux, InvisibleHand help you save money when shopping online by comparing prices help you and automatically notify you cheap price, best deals on the web. All rates are examined and compared in real time.

123 Flash Chat for Linux, 123FlashChat can add a chat room to websites like social networking services. This program can be easily integrated with CMS or forums: Joomla !, phpBB, vBulletin.

PopTray Minus for Linux, PopTray Minus lets you check email in the Inbox, besides it is very handy to manually delete button, eliminates the unwanted messages.

Vuze for Linux, previously known as Azureus, Vuze is the only program in this list is written in the Java language ...

Deluge for Linux, commonly used on Macs, Deluge is a cross-platform support torrent both Linux and Windows. The program interface is written in Python lightweight and C ++ looks similar uTorrent on Windows.

Ktorrent for Linux, was written for KDE interface, Ktorrent is the default torrent download Kubuntu and some distributions use other KDE.

Chrome OS Linux, Chrome OS is a Linux operating system, built from "revolution" Google Chrome browser. The purpose of this project is to provide a compact version for Linux users get the best browsing experience.

Ekiga for Linux, And other names are GnomeMeeting, Ekiga for you to make video calls with high quality audio, frame size and image quality equivalent to DVD. Besides, the program also supports the feature call hold, call forwarding g